skip to main | skip to sidebar

So I don't know what happened but that is supposed to say that his lenght is 26.1 in and his weight is 15.2 lbs.
Seriously I hate computers!

Posted by Carrie Ross at 1:46 PM 2 people who care

Wrigley went in for his 4 month check up today. He was such a good sport even during his immunization shots, he cried of course but not even for a minute. Seriously he is one tough little dude!
WRIGLEY'S STATS:
{L E N G T H : 2 6 . 1 I N.}
{80%}
<40%>
**HEAD CIRCUMFERENCE: 16.3 IN.**
**20%**
The Doc said that Wrigley looked good and healthy and that we could go ahead and start feeding him food. He's been eating rice cereal for just over a week.
BUT TODAY HE HAD HIS FIRST TASTE OF SQUASH!
He ate it pretty good, And we'll see how it goes over the next few days and then we're going to try Bananas!

So I am the most helpless slob when it comes to doing anything with computers. Especially this whole Blog CRAP! I tried changing my wallpaper and by so doing lost everything that I had on the blog....AAAAHHHH! Seriously I need some help here people!

Posted by Carrie Ross at 8:41 PM 1 people who care

A week in Breckenridge! 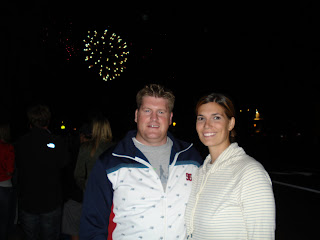 We were lucky enough to get to spend the 4th of July in Breckenridge with Steve's whole family, it was especially great because Emily, Adrian, and sweet little Serena were able to be there also. We got to spend the week fishing...(or trying to anyway. Jesse and Dan had a rough go of it. It seemed that every time they left the house it started to thunder and lightning and just unload on them. But they did eventually get a few bites!), hiking, biking, golfing and white water rafting! It
was so much FUN!!!! 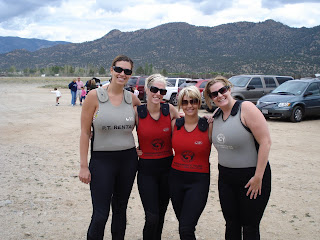 Us girls are modeling the disgusting wet suits that we had to wear. The place that we went was up over the Continental Divide and the water was FREEZING cold because it was snow run off. But it was still great!

I was actually the first to get launched out of the boat, Kris, Jesse and Dan were close to follow suit. However the poor boys got pretty banged up! They both crashed into rocks and limped around for the rest of the week. 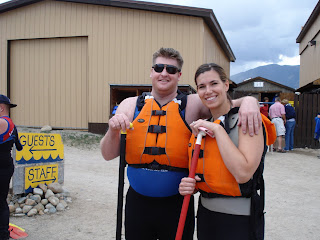 Gruff lovingly dubbed me "text book" for my amazing swim back to the raft! The head guide even said that he had never seen anyone do it so well. I told him that I was just trying to get back to the boat and not get SLAMMED into any rocks! 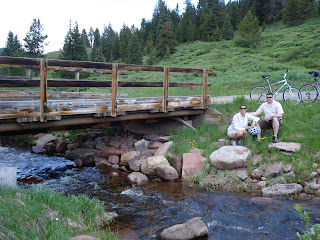 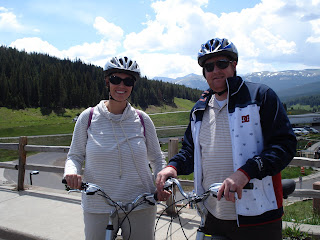 Steve and I took a bike ride from Aspen all the way back down to Frisco, it was like 25 miles....all down hill but still. It was so beautiful that it took longer than it needed to because we kept
stopping to take pictures. 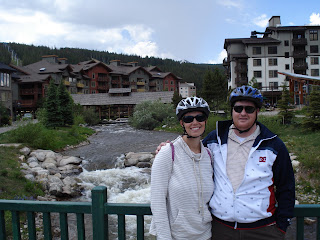 We found this little place right on the bank of the river that people had made rock animals out of. Most of the time we couldn't really tell what they were supposed to be but it was still really cute. There was a heart made out of rocks so I made my sweet heart sit by it so I could get a picture of it! 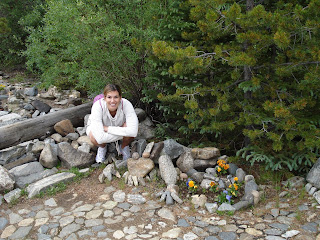 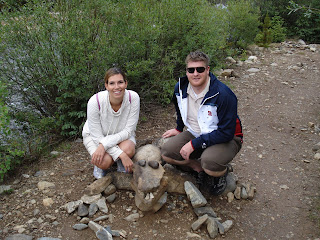 We think that is a lizard....maybe! 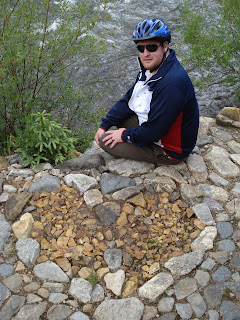 OH HOW CUTE!
I LOVE YOU STEVE!! 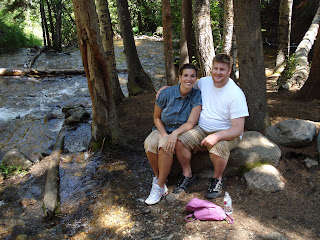 We went on this great little hike to an old caved in mine. We stopped at this pretty stream to take some pictures and be dinner for a few 100 mosquito's..I mean literally! I have about 15 bites just from this hike! 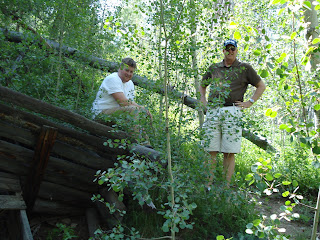 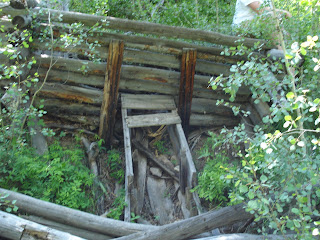 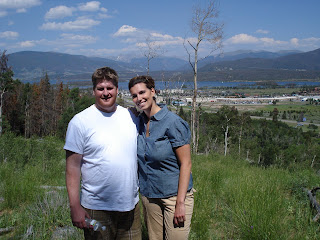 The View is just amazing! That is Lake Dillon in Frisco in the background. I wish I could live there all summer long! I just love it in the mountains!
Last picture I promise!
We decided that since all the grandkids were together we would try to get some pictures taken of them in matching little outfits! It was so much fun to go shopping for them all!
I think that this is one of the cutest pictures of all three of them...well it is one where they are all looking in somewhat the same direction anyway!
Serena is sitting behind the boys and Wrigley and Ethan are cuddling up telling secrets! 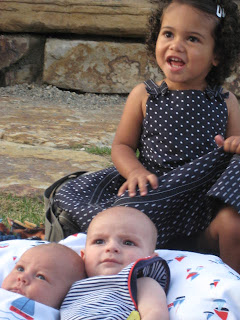 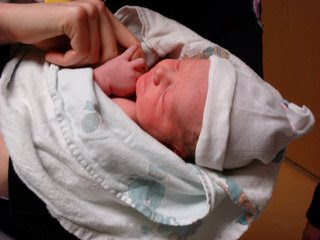 Wrigley is 4 months old today and I can't believe how the time has flown! It seriously feels like yesterday I was pregnant and now here I am with a 4 month old little boy! He has grown so much and accomplished so much in 4 months, some times he seems older than he really is. 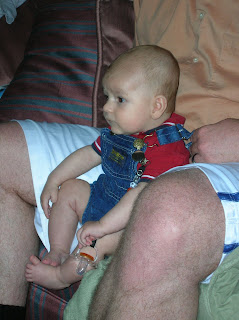 The little guy can hold himself up with very little help form Mom or Dad, and sadly he really likes to watch T.V! I'm a horrible Mom I know!! 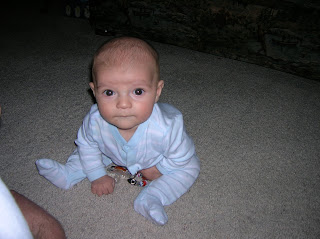 So he's really just leaning here but he tries SO hard to sit up all on his own! He's such a little gobblin'...Speaking of gobblin'

Can you believe it he's eating food! He was so funny this is actually the second attempt at feeding him the rice cereal. Yesterday he screamed and didn't like it at all. He kept spitting it out of his mouth. How he's grown in just one day.

Although I'm a little torn on actually having him eating food just yet. I wanted to wait til he was closer to 6 months to help with brain growth and to reduce the chances of food allergies but I think he needs more food these days. You know growing boy and all.

Sadly I don't have any pictures or video of him actually doing this but he is quite the roller these days. He finally mastered the skill last monday and since then rolls when ever he's left on his back...even when sleeping! Crazy boy! He flirted with the idea for about a week before he finally rolled all the way. He teased us with going almost all the way and then at the last possible second rolling back.

1. Fingers are way better than a binky!..well so is anything else that I can put in my mouth myself!

2. If I fake a cough mommy will come running! I'm such a prankster!

3. I have toes and feet that are fun toys to play with!

5. I have 2 cousins! And they are both a little crazy (but I love them anyway)!

6. My Mommy and Daddy will do anything for me!

One day at a Time 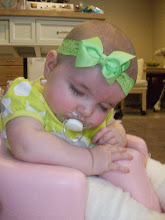 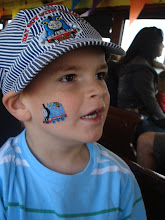